THE SHEEP AND CROCODILE 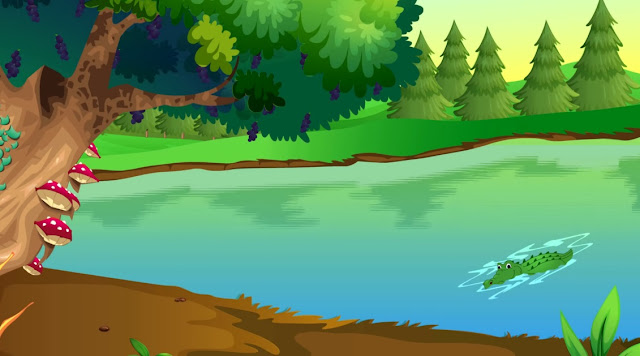 CeritaSakti.com - On the edge of the lake which so green land, there lived a group of Sheeps. Their live is always happy, a lot of fresh grass arround them. They lived in huge land of grass with tree's. The Sheep can eat as much as they can without looked for to hard, and they very enjoy it.

Some day the two younger sheeps want to have bath in the lake, they feel so hot because the sun is so sunny. The older sheep remind them to be very carefull and not swim to far from the edge, because the lake is deep and its dangerous for a sheep.


"Thank you for your attention to us, but we are big now and can take care of our self" said the younger sheep. Soon the two of them jump in to the water and play with fun to enjoy the fress water, Splash...splash...!!!

Since been to long they waiting for this time, they want to swim and enjoy the view arround the lake. But they have to respect and affraid to other older sheeps. All sheeps never been swim in the lake before because they are scared about something who lives under the water.

But today is differences the younger sheeps things they are growing big now. They can do what ever want in decision, they need to have an experience in their lives. Beside lake is part of where they lived.

Atmosphere on edge of the lake is so quiet and cool, make both of them are complacent.
They singing, having joked and feel happy until they forgot about the warning from their friends. They play and swim to far. "let's have a race bro.." said from one younger sheep.

When the other young sheep saw his friend swam he jump and try to chase him. "Uff..uffh...so warm here..all my tired is gone..!" said them.

When they enjoy swiming arround the lake, they didn't realize there were pair of eyes gazed at them from under water. It's A Crocodile..!! Hungry Crocodile..!!!

But the instinct of both young sheeps gave sign that there were in dangerous. They shouted very laudly in the middle of the lake. The other sheeps that they were in the edge of lake heard that and soon they try to help two youngest sheep.

The older sheeps saw the attacked crocodile was chasing to hunted the both of younger sheeps. They try to helped them as they could. One of the older sheep fell the wood box, which was on a boat. Their trial was so exited, Crocodile can be lied and changed their attention to the wood box. "Brak! braak..!!" that wood box broken was attacked by the crocodile.

The things inside the box has flew cut off their high speed. Crocodile fail and couldn't get what he wanted, soon the crocodile turn back again to the first target. This chance not be let by the both of sheeps. They swim quickly to saved themselves when up to the boat and rew the boat as strong as they could to get in the edge of lake.

All the sheeps immediatly jumped near the boat when the boat reached on land. A few minute after they hear sound of snap. "Brak..brak!!'' the boat broke because was attacked the crocodile which he thought that the sheeps still on that boat.

The crocodile fail that he got nothing, so he went back to the deep lake. A few moments later atmosphere here was quiet again but still heard word from both younger sheeps that they feel regreted of their carelessness.

They almost lost their soul because they had ignore the warning from their friends. "Thanks for helping my friend and i am sorry...next time I will listen to you" said the two younger sheeps.
Related Posts
Cerita anak